Geek History Lesson is a podcast that typically takes one character, group or construct from pop culture and reads the wiki page to you for about an hour. Hosted by a guy described as the Jar-Jar Binks of podcasting the series occasionally tries something a bit different.

One such episode allowed the two presenters to pitch their own X-Men team. Now they laid down the ground rules and so now, with nothing better to blog about I decided to try my own.

So I present to you the ‘Best X-men Team’?

The rules are for a seven man team filling the basic roles needed for a successful x-man squad. So you know the rules laid down by the podcast, so you can successfully argue and point out why my choices are stupid, I’ll quickly lay them down first.

Your team should have a;

Leader, (what it says on the tin)

Co-leader, (you can figure this out)

glue, (heart and soul of the team)

rookie, (someone who has never been an x-man before)

I had a few potential choices for leader of my group but the story telling possibilities of giving the team rookie keys to the x-jet were too much to pass up. See Pryde was introduced as the groups rookie way back when and has become an established member by now, but no more. Seen as how her whole thing seems to be growing up I thought this was the next logical step.

Now I’ve always liked Hank McCoy but the idea for him being my number two come from Grant Morrison’s ‘New X-men’. Now before we go any further I should say that I enjoyed his run, the runs around it were bad, the retcons after it were bad but the run in my mind was decent. Perhaps my favourite storyline was ‘Here comes Tomorrow’ where we see a world in which the Beast has been dumped in charge of the Xavier school for the gifted and due to the stress and pressure has taken to drug use. Now due to story related reasons this will lead to him trying to take over the world. Now in my story to avoid this kind of thing, Beast has come up with the idea of handing control of the X-men over to someone else while he concentrates on the school. 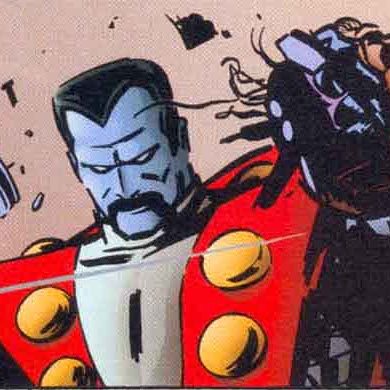 Is it possible to have Kitty without Colossus? I think the only change I would make would be ageing him up and having him be a bit more world weary than the more light hearted character we usually see. I like the Rasputin loyal to mother Russia and dealing with the pressures of adult hood. To show this I would probably give him an Earth-X giant moustache, mainly because I think it looks good on him.

Now just to show what age I was reading X-men in, to me it is hard to have Beast without Bobby Drake. This especially works well with the idea of Hank having to deal with the pressure of running the school. Now you might ask why would I put Kitty in charge instead of Bobby? Well because the whole thing with Bobby was always him not living up to his potential, now usually this involves his powers but in this case I think it would be his leadership and think it would make a good story while he also pals around with Hank keeping things light and fun for him. In terms of his current “revelations” I would pick one side or the other for old Bobby and stick to it and either ignore the way it was revealed or retcon it somehow.

Blink is chosen for the simple reason that I used to love Exiles, where an alternative Blink lead a team across parallel worlds, where it’s the same year and they were the same people but everything else was different to put right what once went wrong. I think she was also dark or at least pragmatic enough to counter Kitty’s light and friendly, innocent nature.

Rahne Sinclair was chosen because I have a thing for red heads with Scottish accents. Well that and she can fill the savage berserker role left by Wolvie without being an un-killable mary-sue. Also while she has been around the X-men for decades now I don’t think she has ever been on the main team. She’s been a lecturer at the academy, an investigator, a rookie and an old hand giving her a variety of skills to add to the team.

Now this was the one that I had most trouble with, especially seen as how it seems every possible mutant in the universe has been on the team at one point or another. Now for those who don’t know Proteus is Xaviers son who has the power to warp and twist reality around him making him potentially the most powerful mutant who ever existed. The problem is that his power burns through his body meaning that he will often take over others to carry on living, often putting him at odds with the X-men for obvious reasons. Well that and the whole being ditched by his father thing.

The idea of this X-men team having to deal with Xavier’s mistakes but also rehabilitating old enemies sounds promising. But then I also grew up watching Dragonball Z so what do you expect?

I’m a fan of Cyclops, though not the biggest of what he has become. The idea of promoting a rookie to lead of the X-men was too good to pass up however and if he isn’t in charge there doesn’t seem much point of having Cyclops around. Though without Cyclops I will say there seems little reason to have Jean Grey, who has never been very interesting as far as I’m concerned. Oh sure she dies a lot and has vast powers but from a character story point of view, meh.

The big one missing though is Wolverine. I don’t hate Wolverine but he only really works as a bad cop and without a decent good cop that doesn’t hold up. The best good cop would be Cyclops but others could fill the role. Kitty, I don’t think is one of them. Having trained under Wolvie and being a good deal younger than him I think she would end up swaying to much to his point of view, to the extent where I might as well put him in charge and that’s not something I’m particularity interested in.

Now that’s my X-team, what’s yours?