In 1873 Phileas Fogg went around the world in 80 days, rescuing Indian princesses and battling native Americans. In 1989 Michael Palin followed in his footsteps, well without the battles, duals and evading the law aspect. Also the Indian bride as far as I am aware. Now in 2014 you too can follow them on this mighty trek, well more like you can help some other rich snob do so, providing the Jeeves to their Wooster, the Alfred to their Batman or the Duckworth to their Scrooge McDuck if you prefer. This is…………………..

Based upon the novel ‘Around the World in 80 Days’, ’80 Days’ sees you taking on the role of Passepartout with a much less well organised master. The game begins with him arrivaing at home to let you know that you will have to be packed and at the station in thirty minutes or he will be leaving without you. Cramming what you can find into the games luggage system you race after him and onto the submersable train connecting the British Isle to France where he informs you that you will be attempting to navigate the globe in under 80 days in order to win a bet. The first problem being that he seems to have no idea where he is going or how he is going to pay for it. While the novels Phileas Fogg had the sense to pack some spending money your own master has enough sense for a mere 4,000 pounds.

For a sense of scale a rough trip in the game can be expected to set you back 14+ so it is up to you to solve both these problems. Buying and selling from city to city and talking with people along the way for what you can expect on the road ahead and how you can move on from there. As if this wasn’t bad enough you have to babysit Fogg as he will deteriorate along the way unless he is properly cared for with his health ticking away from cold snaps, bumpy roads and rough seas. 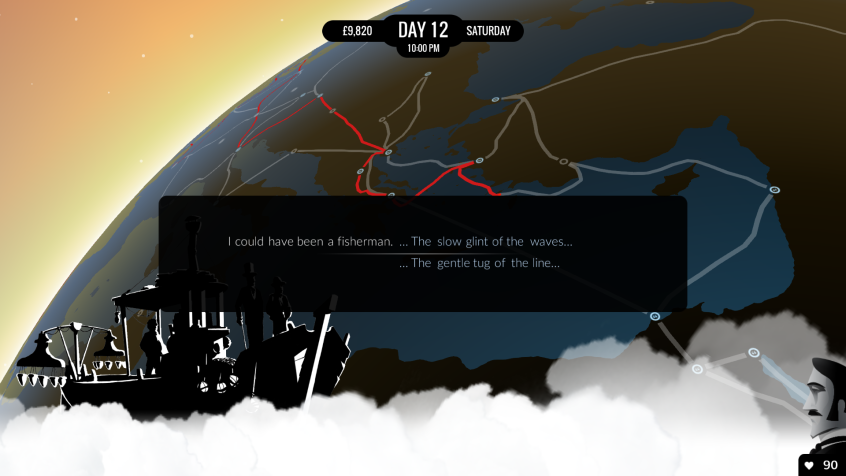 Fortunately he can typically be restored by a shave and a clean pressed set of trousers, anything worse can be tackled by a stay in a hotel overnight though this of course takes time away from your quest to get around the world and back to London in 80 days. Now the game will typically give you a warning if your master is too weak to travel though I am assured that there are stretches where it is possible for him to shuffle off this mortal coil and what is a butler without a master?

The game is described as a cross between a choose your own adventure and a rouge-like. You are in charge of your funds and your destination,  picking routes onward from every town and city trying to factor in when it departs, when it arrives and how comfortable it is for your master along with of course how much it will cost and how much luggage it can carry. Do you throw away that rare Monet or hire the extra car. Do you go slightly out of your way to sell that bottle of ‘plonk’ you’ve had rattaling inside your suitcase for the past month or go the easier route and loose the money. See there are two types of items you will acquire in this game, things to help the journey and things to help your bank balance. Turn up well dressed and you may convince the train to leave a few hours early, pack that warm cloak and mittens and suddenly the airship across Russia isn’t so bad. However that bottle of wine you bought in Paris won’t help unless you can get to Berlin where it is worth a bomb.

Not that this is the only thing you need to watch out for however as just like the original journey you will have a story to tell of your own by the end. Some will be interesting diversions that flesh out the tale; like the levitating atheists of Meteora Valley but others like Airship Pirates and famous literature subs can derail your whole plan, put your masters life at risk and often send you widly off course after making you sit in silence for a few days and this is perhaps my biggest complaint about the game.

Don’t get me wrong I like the game but it does feel like it’s sometimes tripping over its own feet. In a similar fashion to ‘Long live the Queen‘ where the ‘choose your own adventure’ elements trip over the rouge-like segments and likewise the rougelike aspect is sometimes tripping over the ‘cyoa’. You will be looking forward to some romantic tryst aboard the trans-siberian express or spending some time with the intriguing bartender of a Louisianan watering hole and yet you will spend most of your time just trying to find the route to the next town over so you don’t become stuck in some crummy one horse town.

Things crop up that you couldn’t account for that would flow fine with a CYOA-novel but may annoy the rougelike player planning every inch of their journey across the globe and those seeking a story will find themselves moving on before segments are done and altering their course to match what items they have to sell rather than what leads they have encountered and people they have met. For instance Captain Nemo is, as previously mentioned, knocking around. However he is knocking around the very tip of the south of Africa and unless you have a good set of items to sell for passage it is really out of your way and arguably not worth the bother.

Now despite not being a life sim like ‘Long live the Queen’ and thus forcing you to boil everything down to a pretty much left or right choice as you leave the city gates rather than a slightly more complex training programme where you could spread your chances across a few fields you are probably more likely to see the end of this one and even when you don’t the crushing disappointment isn’t as big a blow with you often able to have a rough idea of if you or on time or low on funds far before it becomes a problem.

Once you are done the game also keeps a record of your journey displaying it across the globe each time you boot it up, reminding you that not only is it possible but also showing you where you haven’t yet been. Maybe it’s time for the ride on the Nautilus after all.

The game is currently seven quid on steam and ten dollars on GOG so pick your poison and hope your master doesn’t.