The mutant hunting force are after bigger fish than kids with freaky eyes in….

Now that we’ve got more than a panel or two to go off it should be noted that this is noted British crime boss Vixen who was responsible for taking out Brian’s last understudy to the mantle and current, real world, Captain Britain herself Betsy Braddox. She also got turned into a fox. However she got better. For a bit.

Anyway said criminla master mind is currently breaking in and it’s not going as well as she would like and her and her cronies are going to need something drastic to get them out. Something unstoppable.

I like this comic as a balance between the old days of both Captain Britain and the X-men meeting in what feels like a fairly organic way. Nothing over wrought or complicated. A British crime boss breaks into a super-max and runs across a super-max criminal. One that feels like today would be labelled as off limits for another book to use. Yeah Excalibur is technically an X title but this still feels like Captain Cold taking a break from the Flash by busting into a few banks in Gotham City.

The issue itself is fairly one shot with a fun fight between Brian and Cain while the rest of the team are on round up for the jailbreak in process. Oh and Widget is still around though seems to have made his way down to Newcastle where he’s making more friends and dropping plot threads like a pair of lost German children trying to make their way back out the woods with naught but some bread. 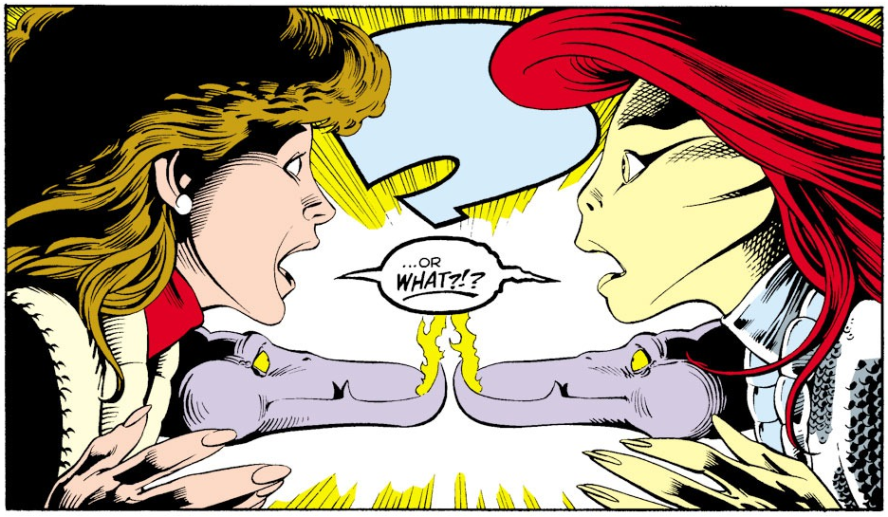 This particular time on the end of the hook is Opal Lun Sat-Yr another hold over from the pages of Captain Britain who will fit in nicely amongst the other plot hooks dropped such as teleporting machine heads and lizard men appearing in the basement. This is the thing with Excalibur. It doesn’t add a plot and tease it along it just sort of drops a ton of them on you and watch you struggle to pick them all up whilst laughing. The fact that this rain of plot hooks are all bouncing off each other whilst our team are happily taking time out for training sessions and shopping trips does mean that our heroes are, in our eyes at least, always reacting rather than taking charge. For instance they don’t even know about Widget yet and rather than track down the source of the jail break in the form of Vixen the team are going to open their new club house in Cornwall and then sit out a nasty storm. The kind of storm that tends to happen when you establish your headquarters off shore in a lighthouse. Though there can be some frustration with the characters over this. After all this is the same series that had Nightcrawler walking through normal door ways and coming out god knows where which would warrant a in depth scientific scene in every other book but here seems to have been completely written off by our would be hero in the same way we might shrug off a miss delivered letter.

In defence of the book though while these big other worldly threads are tossed around like rubber chicken’s in a behind the couch fight scene the more personal ones feel like they have some weight. Such as the return of Brian’s drinking problem problem as well as the, somewhat connected, growing relationship between Kurt and Meggan. I’m not sure if they were trying to go for a Scott, Jean, and Logan type thing but you do get a nice turn around with Meggan dealing with an, often, surly alcoholic while the nice guy waits off to the side. But I’ll get into that further down the line. As far the final scene, well it feels like this is definitely a middle issue between the Warwolves and the upcoming Arcade and they slap the final panel on because other wise they wouldn’t have an end for this week. The whole we’re a family and a team might work for the end of your pilot, and while we might only be on issue three (four if you count the special), but it already feels a little trite when we have aliens in the basement, alcoholics in charge, and budding romances between swashbucklers and ladies who are already taken. It feels like this could have done with a cliff hanger or a set up more than a hands in team shot type freeze frame.