Okay as I said last time we are on the home stretch now, so issue 8, ooooonwaaaaard!

As I said before this is the wrapup for the series and it is also where it starts to come apart at the seams. It starts okay with the heroes gathered for a memorial for Supergirl who is actually, totally dead and will never be seen again, never ever ever.

Oh. FYI, we are only about halfway through this line up and there are more to add to the end, since this was created. She has a lot of costumes.

See Supergirl probably got the worst deal out of ‘Crisis’ because while Barry Allen died (Spoiler) people at least remembered him. In universe I mean, DC didn’t go around comically hitting people on the head with frying pans or something to give their readers amnesia of Linda Lee (aka Supergirl). Nowadays we realise that it’s better to get Barry out of the way before you reshape the multi-verse however, otherwise he tries to “help” and you get Flashpoint.

Supergirl was one of the problems for DC that ‘Crisis’ was supposed to solve, they wanted Superman to be a special snowflake who was the only survivor of Krypton, but those pesky fans decided they liked Supergirl and so she would return in numerous ways over the next few years, from shape changing aliens to angels from heaven, before they let her back in.

But I’m getting ahead of myself, back to the series. The last few issues feel a lot like padding as we step up to face the Anti-Monitor again, the villains taking advantage of this lull decide to try and take over three out of the five Earths that remain, while all the heroes were down the pub or something moaning about the day they had just had. Now this plot had been set up with a few panels of Braniac and Lex working together but the story doesn’t really add anything and just serves to kill off a few heroes and cripple a couple more in “dramatic” ways before the end of the series. Plus it’s stopped by the Spectre threatening to turn this multi-verse around and go straight home unless everyone behaves. 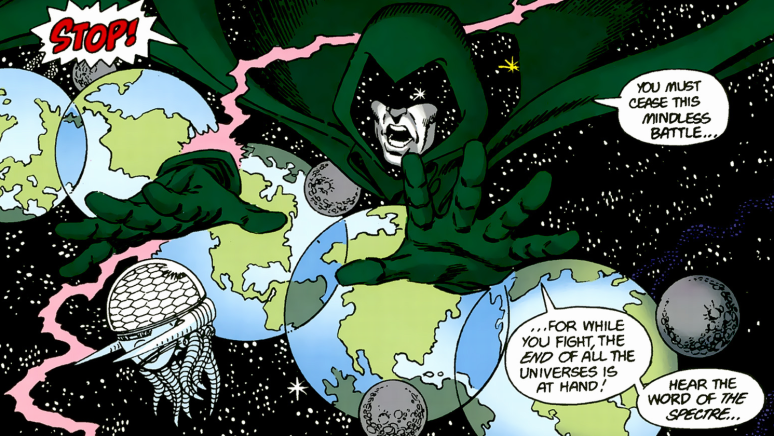 Likewise while the series had managed to remain fairly self contained up until this point that starts to collapse as we near the end. See while ‘Crisis’ had been running it had also been running through every other book at the time too; which wasn’t so bad as it kept the main action focused and just let everyone else explore, talk and relax. Sure it had drawn on what had been happening in comics before it started and setting up stuff to take place in these solo series but it had remained, as best as possible, fairly self contained.

Now however we have the introduction of Superboy Prime. I’ll take a few lines to go over the naming structure of the worlds as I realise I haven’t spent the time to do so yet. You see Earth 1 was, and I believe still is, the main line of comics DC puts out. When you pick up any DC comic it is most likely set there. Earth 2 was for the older generation of Superhero, usually phased out for hipper younger heroes though that has changed in recent years. Yes the notion of a multiverse that this “epic” was designed to get rid, of has since been reversed by DC most likely for the excuse to give the Justice League goatees and have them fight the normal League. Now the other Earths that survive don’t stick to this this numbering system with places like Earth X or Earth S but they kind of follow the basic idea. One is a world where World War 2 never ended and the others were often set aside for characters DC had acquired off others but felt were to crass to mingle with their well written properties.

Earth Prime meanwhile was, in theory our Earth, with Superboy its only hero. Named and dressed for the comic book character Superman, put of by DC coimics. Don’t worry this doesn’t get too meta till Super Crisis on infinity + 1 Earths later on. For the best idea behind the notion of an Earth Prime with a superman, don’t read this or the book he originally appeared in nor his subsequent appearances and instead go for Superman Secret Identity from Kurt Buseik. Anyway, he had originally appeared in a standalone issue of Superman a few weeks prior trying to save his Earth from the Anti-Monitor, he failed and was promptly forgotten until he turns up in the final few issues here with more plot, lines and character than most of the characters who had been going for years or even been in Crisis of Infinite Earths longer. This kind of makes sense for Alexander Luthor Jr of Earth 3 who is introduced in issue one and built up to help lead the heroes throughout the series through his magical macguffin powers over space and time but why Superboy Prime was needed I don’t know, we already have two Supermen, isn’t that enough?

It’s not like they even spent some time dealing with the concept of a ‘Prime’ Earth or why it should be called such. I mean sure DC already has Earth 1 but you can argue that that’s simply called that by the people who live there because it was the first Earth they found, you know because it’s under their feet. Anyway we gather the heroes left and head off for the final showdown with the Anti-Monitor. I won’t tell you who wins but I bet you can guess. 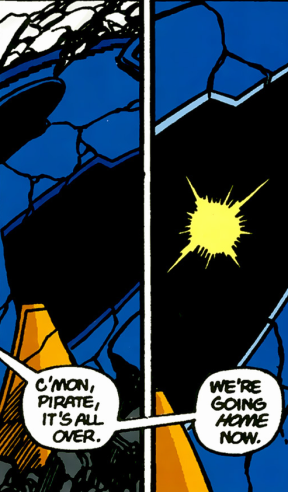 They make an effort to link the end up with the beginning Wibbly Wobbly style which was kind of cute I guess and the final fight does carry some weight behind it, it’s just a shame that it’s given as much space as the explanation for the new world the comics will now be running in. It’s nice that they kind of admit their perameters and rules for the new world are pulled out of their arse but in truth it’s kind of easy to explain. We live on Earth 1 now, anyone from the other worlds who doesn’t have a direct counterpart on this earth gets to live here i.e Jay Garrick, anyone who does doesn’t, i.e the original Clark Kent. How this worked for the average citizen, we don’t know because they aren’t important enough to spend time on.

Coincidentally most of the people who would suffer from this problem were killed off or soon will be. Still, you can’t help but read this and realize that it isn’t an epic story about parallel worlds and the like but DC cleaning house.

So in conclusion should you bother tracking down ‘Crisis’ is it worth your time? Well if you’re interested in DC or even comic book history then probably yes. Otherwise I’d say probably not. Unless you grew up on these old comics you’ll miss a lot of the weight from the event. It’s like watching Citizen Kane, fundamental film making in its day but now so copied and emulated that it’s hard to understand the importance of the original. Though instead of forking out for the million and six, five dollar books coming out of Marvel and DC this summer it might be a nice alternative, it’ll be cheaper, easier to track down and will be pretty much the same in the long run. Plus you get some cracking art from George Perez and some admittedly decent action packed moments.

2 thoughts on “What is Crisis on Infinite Earths? Part 3”